If you’ve ever shopped at a mall or grocery store around the holidays, you’ve seen the Salvation Army volunteers collecting donations. They are usually wearing a red apron, standing next to a red kettle and ringing a bell. You can’t miss them, but do you know why they are collecting donations? Find out the answer to this question and more below. Here is everything you need to know about the Salvation Army Kettle Kick-Off in Denton at Golden Triangle Mall.

History of the Red Kettles

It all started in 1891 with Salvation Army Captain Joseph McFee. He learned that many people in his hometown of San Francisco were going hungry around the holidays and set out to find a solution to this problem. The biggest factor holding him back was funding the project. He decided to take the issue into the hands of the public and asked for donations on the streets of San Francisco. When his plan allowed him to feed up to 1000 of the poorest people in the city, it spread like wildfire across the united states. This year will be the 127th Red Kettle Campaign.

The beginning of this incredible campaign is usually met with a kick-off event in each of the participating cities. This year, the Salvation Army Kettle Kick-Off in Denton is at 10:30 A.M. on Wednesday, November 14th at Golden Triangle Mall. The Salvation Army Denton Corps has put together an event that is sure to entertain from beginning to end, while also raising awareness for a great cause. You’ll find performances from groups such as:

Not only will you find outstanding performances at the Salvation Army Kettle Kick-Off in Denton, but you’ll also have the opportunity to meet some of the important public figures of our town. Mayor Chris Watts will be in attendance as the honorary chairperson of the event, so feel free to introduce yourself afterward. You will also have the chance to interact with the Denton Fire Department, Denton Police Chief Frank Dixon and Dr. Lynn Stucky.

With all of these entertaining performances and important guests, The Salvation Army Kettle Kick-Off in Denton is sure to be a good time for everyone. So, come on down to celebrate a good cause, meet the mayor and get in some quality family shopping while you’re here. Want to learn more about what Golden Triangle Mall has to offer? Check out our directory today! 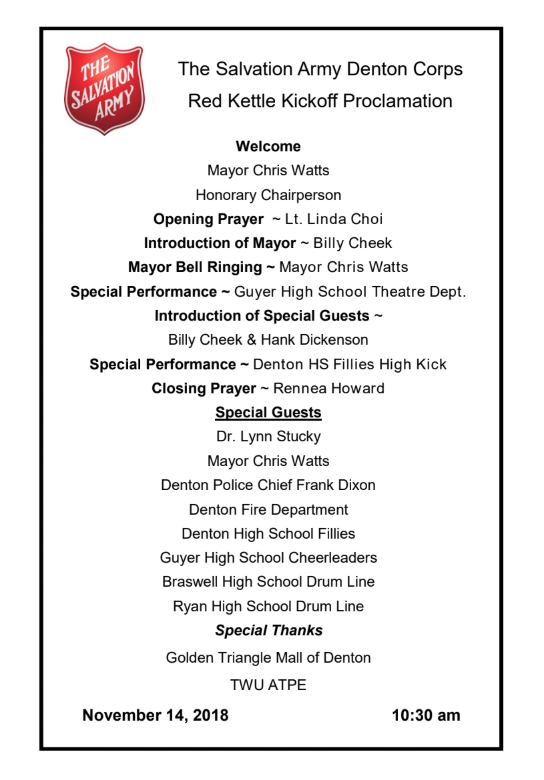